“Do not go gentle into that good night,…
Rage, rage against the dying of the light…”

It was 20 degrees (Farenheit) this morning. Some of the first snow still has not melted. 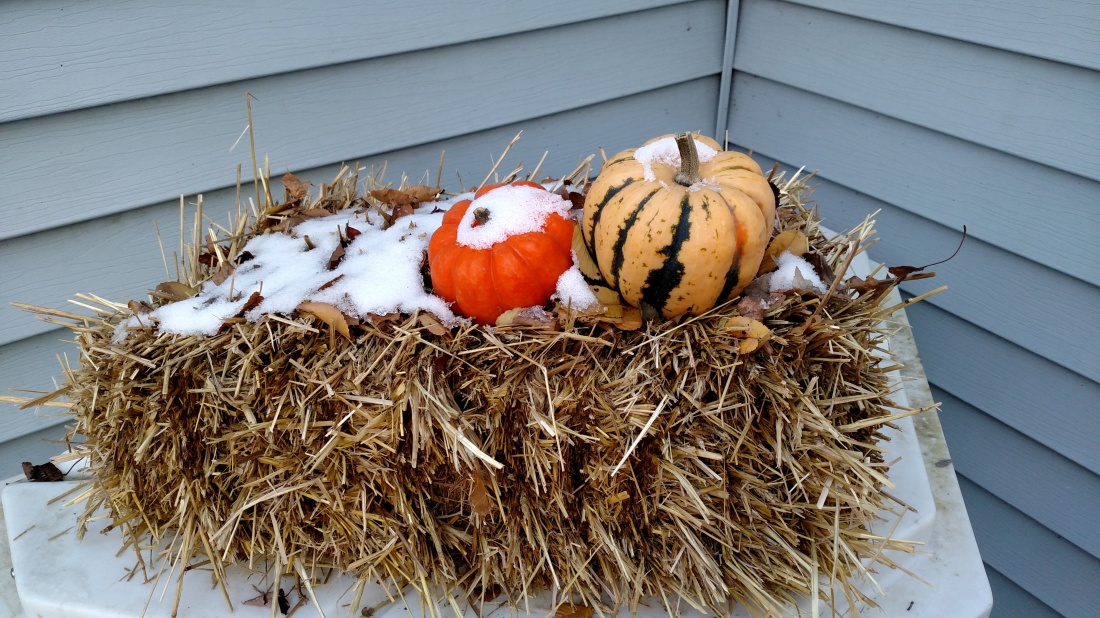 A few weeks ago I remembered to shut off the water to the outside faucets, and to unscrew the hoses – which I left (not neatly coiled) on the ground. The hoses might freeze but HA! the pipes won’t.

I’m the last house on the block with a lawn completely blanketed in golden leaves, because my day for the lawn guys was Friday, and Friday was the day it snowed. They’ll come this week for the last round of lawn maintenance (“Fall clean-up”) this year, and they’ll do the gutters too.

Mike used to do the gutters, and insisted on going up on top of the house even when he could barely stand up for more than 5 minutes. It’s a guy thing, I guess. Like shoveling snow. He did that too, until he nearly fainted again.

I must have been thinking about that when I was puttering around in my flannel nightgown  on this cold, (but sunny and lovely, in that low-slanty-light, late autumn way) morning, when I wandered into the downstairs bathroom, off the kitchen, to ponder the state of the peeling wallpaper.

And was stopped in my tracks by that cutesy turkey towel, and the little scarecrow-in-a-jar Mike and I bought on some long-ago fall excursion, staring at me. I got them out right after Halloween, in accordance with the Thanksgiving Rules (no Christmas decorations, or Christmas music, until the day AFTER Thanksgiving. Over the River and Through the Woods, Now Thank We All Our God, We Gather Together: GOT IT?)

Oh dear. It appears there’s a faucet I haven’t quite managed to turn off.

Not sweet, sentimental, “aww, remember? Isn’t that cute?” tears – these were real tears, coming from sudden, unexpected burst of despair.

I looked at myself in the mirror and thought, “Anne, maybe it is finally time to see someone (“see someone” being that dodgy euphemism for “get a therapist.”)”

I’m one of those people who thinks I should be able to snap out of it on my own. Figure out what’s setting me off and fix it, right? Have some backbone, clean something, paint something, get crackin’ cutting those logs in half –  you’ll need them for the fireplace soon. Feeling sick? Blue? Get your ass outdoors and go for a brisk walk.

Or, at least, head over to the fitness center and work it out.

Which I did, and I feel better. Much better.

I also figured out what hit me this morning, and why seeing that towel, and the gorgeous gold leaf-blanket all over the lawn, turned the tear-faucet on. It’s the same thing that happens every year when autumn slips away.

Not that I don’t love what’s coming next, ho, ho, hark the herald and all that, but I always feel cheated – I want more of these crisp, blue sky, golden fall days.

The best seasons are always the shortest.

That must have gotten wrapped up in my subconscious with losing Mike too soon.

He wanted to make it to October, so he could die under a bright blue October sky, but it didn’t work out that way. He died on a hot August night, almost exactly at the halfway point between the 18 and 24 months of time the oncologist had estimated he would have.

His birthday is in October, and now both he and October are gone, and the last blaze of autumn is frozen in the yard, the trees are bare and the gutters need cleaning, to keep the ice dams of winter at bay.

I pulled myself together before I came out of that bathroom, so my daughter wouldn’t see I’d been crying again, and noticed that my favorite grass in the front garden,

which had been completely flattened by the wet snow, had bounced back.

It bloomed very late, the last week of October, with pretty pinkish tufts of fluff at the top.

Then, almost as quickly as it had bloomed, it dried up, but still stood there, adding structure and height where other flowering plants and shrubs had drooped or died back completely.

And there it was this morning, revived, out from under that hummock of wet, heavy snow, standing tall again. All by itself.

The lawn guys whacked it off very early last spring, when I wanted to enjoy it’s structure for longer, but it came all the way back.

That beautiful slanty-light sunshine is supposed to last through Friday, so maybe there will be a few more brisk walks before the cold and snow set in for real.

3 thoughts on “Resilience, or, Time to Turn Off the Water” 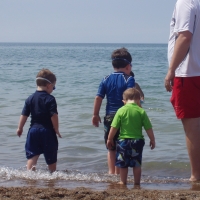 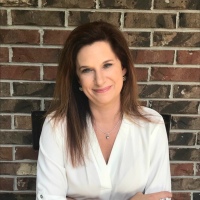