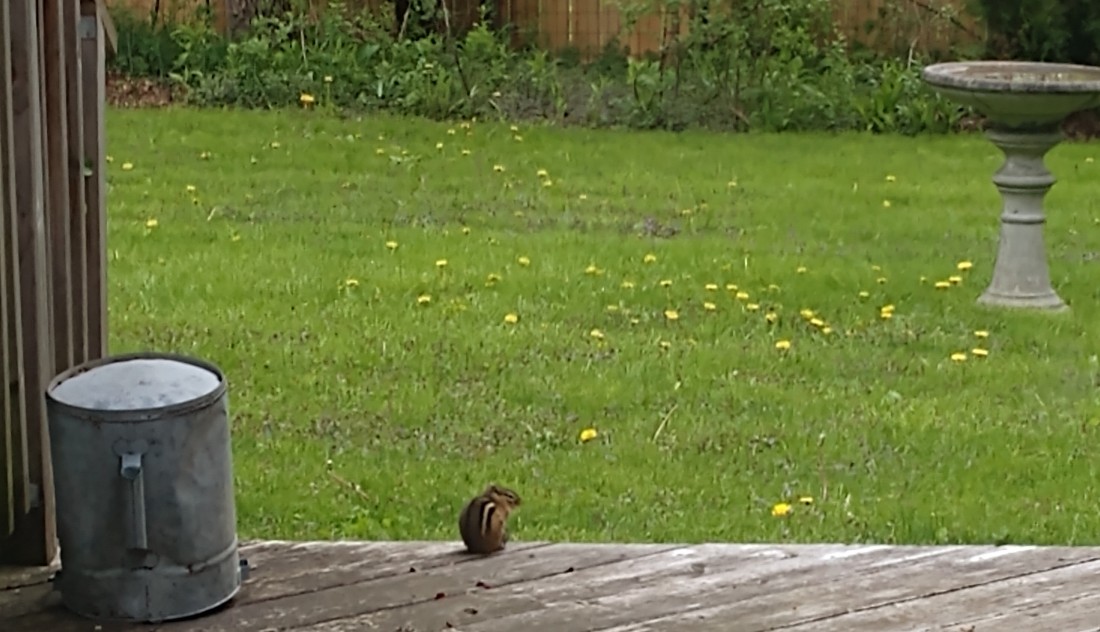 Leave door to garage open too long while unloading groceries from car. During an early afternoon bout of vacuuming in anticipation of guests tomorrow, notice a flash of brown fur along the wall,  vanishing behind desk.

What the hell was that?

Investigate. Observe chipmunk cowering by door to garage, now closed and locked after all groceries in.

Open other kitchen door, that leads to the front patio and butterfly garden.  Hope chipmunk will find his way out. No such luck. Chipmunk proceeds in opposite direction, zipping past door,  straight through kitchen and into living room.

Grab dusting stick, used to get cobwebs out of places not otherwise reachable.  Give chase while also opening door to deck. Swat at chipmunk running along baseboard radiator, thinking he’d seize chance to scoot outside. No such luck. Observe chipmunk zipping past the open door, back through kitchen and into bathroom. See chipmunk hiding behind toilet.

Grab dusting stick again. Hoist self onto vanity counter.  Scooch along until swatting at chipmunk with feet off floor becomes possible. Observe him zipping back out and turning left to scoot back under desk instead of heading out open door RIGHT IN FRONT OF HIM. Stupid damn chipmunk!

Brother suggests humane trap. Sends link with description, and price. That much? Drat, that means a trip to the hardware store. So much for using bro and sister in law’s impending visit tomorrow as motivation for a total house swabdown. Swabdown Interruptus.

Receipts go in a cubby at the top of desk hutch. Hungry. Stuff receipts in there quickly in order to get on to consuming wings.

Chipmunk leaps out of cubby in desk hutch, lands on desk and vanishes at light speed.

Intuit that chipmunk has retreated into bathroom again, under closed door with unusually wide gap at bottom. Discover chipmunk cowering behind toilet, again.

Fail to realize trap could be introduced into bathroom, door closed, and chipmunk captured.  Give chase instead. Open door again, back up on vanity counter again, thwap at chipmunk with dusting stick, again. No luck. Chipmunk exits bathroom at warp speed, turns left, again, instead of going out open door RIGHT IN FRONT OF HIM, again. Chipmunk presumably hiding under desk again although he cannot be seen back there.

Improvise barrier to keep chipmunk from running through kitchen again. Barrier constructed of top of late husband Mike’s oak kitchen table, disassembled and brought in from garage. Table was the only thing other than clothes, books and a hurricane lamp  late husband brought with him into marriage. Thanks, hon, still useful. Block off  kitchen, hope little bugger won’t get in there again. Set trap, eat wings, wait.

Not good at waiting, but use it as a chance to sit outside with AD (Angelic Daughter) and try to chill.

An hour later, after three intermittent checks, see that the trap has been sprung. Got him!

Carefully lift trap, take outdoors,  sweet-talking chipmunk to keep him from running from one end of trap to the other, causing trap to heel over like a ship on wavy seas. Close house doors behind. No repeat! Walk to edge of  yard, push lever down to open doors of trap. Don’t see anything. Hear quick rustling of leaf on grass, “thth.” Check trap. Empty. Never saw him run. Fast little dude.

Congratulate self on adding “chipmunk extraction” to list of skills.  Screams turn to smiles. Express pride and  relief. Desk area reopened for business! Sweep up remains of granola used as bait. Little bugger didn’t get much supper, ha.

Swabdown to recommence in the morning, prior to cooking for guests. The invited ones.

Enjoying a chipmunk-free desk area, and hoping to keep it that way, I remain,