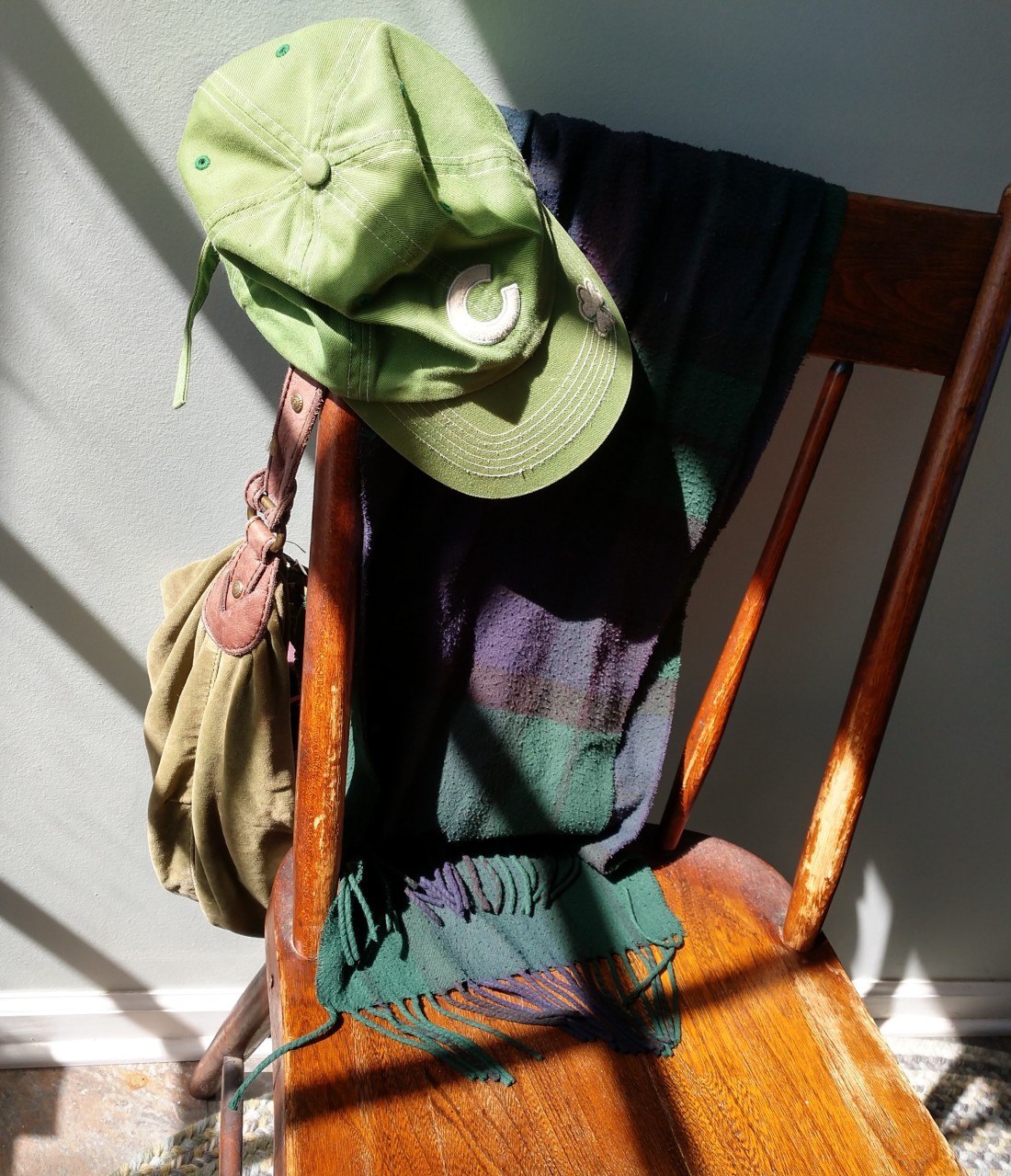 I look terrible in green. I’ll wear it in a Campbell plaid, offset by enough navy to keep my face from turning sallow.

I’ve been wearing Mike’s Campbell plaid scarf all winter. I’m sure it originally was mine, but he wore it as his sole neck-warmer through all the blizzards and vortexes we endured together. He also took my little black Russian-looking hat, which I have also been wearing all winter.

Green everywhere today, not only because it is St. Patrick’s Day in Chicagoland, where more than one river has been dyed green, but because the annual miracle of spring has begun. Perhaps slightly more miraculous than usual, because this has been one bitch of a winter – grey, snow, thaw, rain, freeze, vortex, snow, snow, snow, ice, slush, grey, rain – until you are going mad and believe you may never see the sun, or a blue sky, or green grass, ever again.

And then, there they are. The sun, the sky, the grass.

The immortal snowpiles that won’t melt until June are still blocking views in parking lots, but still.

In spring, Chicago’s headwear changes. Even though the nut cases who will actually sit in the stands at Wrigley in early April will freeze their ears off, they’ll be wearing baseball caps.

So, despite my habit of not getting green too close to my face, today, I put away the little black Russian looking hat, and  put on Mike’s green, be-shamrocked Cubs hat.

Not just because it is the only completely green article of clothing I have, but because it was Mike’s.

Mike’s middle name was Patrick (derived from the Latin for “father:” appropriate, because Mike was a great Dad). He was only one quarter Irish and he never made much of St. Patrick’s day, but in Chicago, you can’t avoid it. Green river, green beer – one year my Dad’s train-commuting seat-mate gave him a green bagel and a green yarmulke. I was relieved when my brother’s genealogical research turned up an Irish great-great grandmother. OK! I surrender. Kiss me, I’m Irish.

But I’m not sure still wearing Mike’s scarf and hat is all that healthy.

Spring is bringing some kind of emotional, as well as physical, thaw, and grief keeps busting out unexpectedly, suddenly, like bulbs I forgot I planted, or last summer’s un-pulled weeds emerging overnight from under the melting snow. It startles me like a smack of spring thunder when you were still expecting the silence of snow.

Driving aimlessly down the road last night, looking for, and oddly not finding, anyplace featuring live Irish music, even in the two close-by towns-full-of-bars, and listening to the radio, just because I had some me-time available, wearing Mike’s hat, I passed the lane that leads into the small industrial area, back to the odd little crematorium – I thought I had put that out of my mind, but last night? Oomph – like a punch in the gut.

This morning, on the way to church, “Landslide” came on the radio – the mature, more recent one recorded by the older Stevie Nicks:

“Can the child within my heart rise above?
Can I sail through the changing ocean tides?
Can I handle the seasons of my life?
I don’t know…

Tears, under sunglasses. Grateful for the sunglasses. Don’t cry in front of her, our child, anymore. She’s getting through it.

I still haven’t figured out how to sell his game collection.

Maybe all the redecorating I’ve been doing (or attempting) lately has just been a frantic effort to suppress grief. Push it way down, keep it down, don’t let it surface.

But, I wear the scarf and the hat, not just for the green, but as present, physical symbols of his absence, worn with love and remembrance, giving form to my shadowy, inner void.

Time passes. I get older. If I give myself the time to really wear the grief, put it on like a coat with the hat and the scarf, I fear I will run out of time to take it off enough to really live what’s left of my life.

You can’t do something significant for others, or feel gratitude and joy to their fullest, if you are a shrouded, diminished, half-empty version of yourself.

If I must wear a coat of grief, let’s make it a lighter, spring coat.

Our next forecast for sun is Thursday, and highs in the 50’s (F) Friday.

No need for a scarf or hat.

Your unpredictably weepy but going with it until it passes, and it does,

The glass exploded. One just like the one pictured there, on the windowsill.

I could not believe how much glass was in that glass.

It was everywhere – inside and under the dishwasher I had just taken it out of, under the fridge across the floor, into the living room and the breezeway.

Tiny shards of it in my fingers and the meat of my hand.

I had just taken it out of the dishwasher, and accidentally tapped it – just tapped it -on the underside of the Bulgarian-installed quartz countertop.

Rational minded me instantly assumed that I had chanced upon the perfect point on the glass that was scratched or hairline cracked or otherwise weakened just enough to cause some sort of scientifically explainable reaction.

I had to vacuum the inside of the dishwasher along with the kitchen and breezeway floors, missing a church service I wanted to attend, because it was unsafe for my daughter or Sophie the cat to walk through the kitchen until I was sure it was shard-free.

Earlier that morning, the relatively new television started acting weird, too, providing sound but no picture – just an odd sort of lavender glow.

Turns out I had connected the HDMI cables in the wrong inputs after switching out the DVR for a no-charge simple cable box (which still makes me mad – that even though I get internet service from this provider and I could watch TV via internet only, they still make me have a box and their salesperson was unable to give a technical reason why  – grrrr.)

Then the shelf on the new hutch on my new desk half-collapsed – one of the pegs that holds it up just suddenly fell out.

There was nothing significant about the date that I could remember. I don’t remember what I was thinking about, other than considering giving up on my book, and missing Mike, and feeling a little lost about my future, when the glass exploded.

After I got the glass cleaned up and the shelf fixed, I spent a lot of time trying to complete an online job application, and just as I was finishing it, my computer spontaneously shut down.

Just turned itself off.

Wind? Was there a power surge and the strip cut the power? But the lights on all the other chargers plugged in to the strip were still on.

These past few days, every time I veer in the direction of giving up on my notions of writing, speaking and singing, something interrupts, or switches off, or falls apart, or explodes.

I wake up in the middle of the night in a sweaty panic, wondering what the hell I’m doing and what could happen, all the bad stuff that could happen, in my capacity as a professional-class worst-case-scenario OCD worrier.

My heart races. I cringe and writhe, remembering long-ago embarrassments, mistakes, and failures, imagining they will all happen again now, and be much worse. I read nonsense on my phone for two hours to try to calm down and go back to sleep.

And then, today: a sparkling bright, perfect winter day. No extremes. Just a spotless blue sky, sunshine and fresh snow on the ground.

The house has stopped creaking and snapping and kerpowing, now that the temperature has moderated, but I predict a spate of “giant potholes that ate Chicago” blog posts and news stories, come spring, because of the insane temperature swings we’ve had. A thaw-and-freeze cycle that cracked steel holding up Lake Shore Drive is surely causing concrete and asphalt pavement to crack and crumble all over the area.

But we’re gaining daylight – the sun is up when I rise, now, and I can still contemplate a walk in the late afternoon.

It’s too soon to say we’ve turned a corner – March is yet to come, all lion and lamb, and it always, always snows one more time in April.

Waiting for the clock to run out on the agents who have my query and trying to screw up the courage to start another round instead of giving up, I remain,

Your anxious, worried, but like the backyard rabbit who survived the vortex by hiding under the deck, as yet unconquered by winter extremes and associated all-night-vigils,

I revised it, to make it clear that I understand this is a very dangerous, life threatening situation.

And because I’m not that idiot 20-something that went outside in temperatures like this anymore.

That was a spectacularly stupid thing to do.

Please go back and read the revised version of that last post.

Because I worry about you. Pretty much all the time. It’s what I do best.

And because the wind is picking up.

I’ll be here, worrying about you, and praying for anyone still looking for a place to go.

Fretting, and listening to every pop and creak coming from inside and outside the house, I remain,