Grieving in a grievous world

Grief alters time, eradicating now with then. It flares up, prompted by insignificant things.

Except for the significance the insignificant things invoke.

Grief doesn’t recognize magnitude relative to other, more recent, shocking and violent horrors, affecting many more people, all at once.

Should I be ashamed of my grief? Of writing about grief, today? Is it small, selfish? When grief bursts inside my chest, brought on by a radio ad for some long forgotten music venue we visited only once, stealing my breath, and I blink and flutter and try to control my voice, is that trivial, comparatively?

It happens at the intersection I can’t avoid when driving Angelic Daughter home from her once-a-month fast-food indulgence: grabs me by the throat and transports me to the merciful end of Mike’s final fall excursion, five years ago. It was way too long a drive, longer than I thought it would be. We didn’t know about the cancer yet, but he was uncomfortable, he was angry, he just wanted to get home.

I was tense, because I knew he was on the brink of exploding, close to raging at me for choosing the wrong road, the wrong destination, that everything I had done that day was wrong, that I was crazy. He did that when he was in pain, physically or emotionally.

I drifted left too soon and bumped up over the rumble-stripped median, before the turn lane began. A jolt. A bad ending to a bad day.

There’s the place near the grocery store where he finally got pulled over, after driving on an expired license for ten years. He had failed the written test and stomped out, refusing to wait any longer for another chance. He got caught because I had forgotten to renew the sticker on the license plate. He thought I did that deliberately.

The spice jars I gave him: one of his few, final Christmas presents, to use in the new kitchen, hoping he would find them inspiring, cheering, life-extending.

I can’t seem to keep them organized the way he did. But I see him arranging them.

The long-lost chess piece from his little magnetic traveling set, deep in the bottom of a box in the closet. How?

The rugless, blank place on the living room floor where the hospital bed had been.

She has stopped repeating how things went the night he died. Now it’s “Dad used to…” Used to take her there, feed her that, play.

The red shed is gone now, where he kept the large riding mower he bought just days after we moved in, twenty years ago. He would put it in neutral while it was off, and push her around on it. I still see it, right there at the edge of the yard, when I look out the windows by my desk. I see the tractor and her on it, him pushing.

Summer was his time. I see him sun-browned in his tennis whites, serving, volleying, hitting passing shots, my Dad gleefully niggling his tennis buddies – Mike was his ringer.

The lamp I bought, afraid he’d hate it. 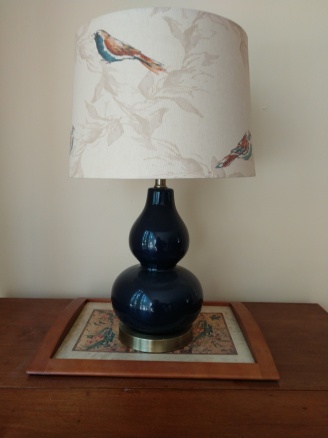 I bought it because I liked the shade, the color, and especially the shape. I thought it looked a bit like me.

He said he loved the lamp, and I loved him for that.

These things hold memories, but they don’t blindside me with intense flashbacks, like the radio ad, or the fall excursion intersection, or when I look up at the clock and find that the time reads as the date we met, or his birthday.

They don’t draw sudden tears, like the monarch butterfly that flitted by my desk windows, very close, for several seconds, just as I was writing about the bad end to the bad fall day.

She waits for me, to be as entertaining as he was.

I don’t cook like he did. I don’t shoot baskets or play tag. I couldn’t ride the tandem and finally sold it.

But I took her horseback riding, in a state park an hour away.

But they responded when I spoke to them gently, and when we sang to them.

We saw more monarch butterflies along the trail than we have seen all summer.

She said, “Dad rode Jesse.” In Arizona, on vacation, more than ten years ago.

Then she said, “I really enjoyed going horseback riding with you, Mom.”

Anticipating our next trail ride, I remain, your time-traveling, tearful,

Image by Pete Linforth from Pixabay 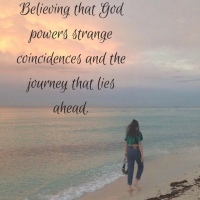 Idlings
The Earl of Southampton's Cat

A Trewth Reveal'd, Most Prejudicial to the Honor of W. Shakespeare

The one in which I write fiction that is not all fun and games.

Breaking news and thoughtless commentary on the world.

Betsy Lerner
through a widow's eyes

" Believing that God powers strange coincidences and the journey that lies ahead."

Meditatio Ephemera
Moon, Stars and Beyond