Skip to content
Ridiculouswoman how not to, learning from mistakes October 11, 2019

I draw the line at toilet tanks. Nobody’s going to see behind it, anyway.  I am not going to pull a toilet tank off just to make a nice smooth wall behind it. I’ll just slap whatever I can get back there on it, and leave it at that. I think I got primer over all of the ripped part, and when I put joint compound back there, I don’t care how lumpy it turns out to be. That will be the next owner’s problem, along with my eccentric paint jobs. Ha!

But the wall above the vanity is a problem. I got a little too gleeful when I figured out that there was another layer of something or other under the wallpaper backing, and if I got down to that layer and found a finger hold, I could just rip the paper right up and off. What could have been a five hour job was reduced to two, and I got the rented wallpaper steamer-offer thingee back to the hardware store in plenty of time.

Except I ended up with this: 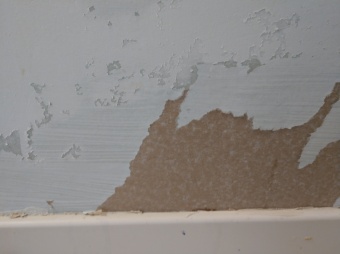 The guy at the rental desk didn’t know what to do about the drywall, even though he showed me a picture of the garage that he had been drywalling all around. So he googled it: OK, primer, joint compound. Go see paint guy.

So now, apparently, I will add “drywall repair” to my repertoire of do-it-myselfing stuff. We’ll see how that goes.

I confess, however, that just looking at the front hall defeats me. I surrender. Two layers of old, fabric wallpaper on a plaster wall. So I called a highly recommended paint guy  for an estimate for getting those two layers of ancient wallpaper off the front hall walls and prepping the walls for painting, which will be the finale of all this.

Except for the deck.

What was to have been my adventure in power-washing turned into a misadventure when I couldn’t get the hose into the trigger-sprayer thingee.  But wait! Troubleshooting guide online! O-ring has slipped. Slide it back down!

Yeah, right. How? I know! I can slip a tiny screwdriver under it to pry it out enough and roll it down!

Oops. O-ring snaps off and flies away.

But online troubleshooting guide says, “if that doesn’t work, use a sharp knife to remove O-ring.” Yay me! Already removed it! Aren’t I clever?

The troubleshooting guide didn’t say anything about the washer leaking, without the O-ring that guide said to take a sharp knife to.

Kindly brother comes over to help, with his borrowed machine. Attempts fix with O-ring kit I purchased for him at local big box hardware store.

Hose explodes off trigger-sprayer thingee and scatters O-rings across the yard. No windows were broken or eyes put out during this experiment in attempting-to-avoid-ordering-parts-from-manufacturer. But no deckwashing got done, either.

Consoled myself by blowing several hundred dollars on new sinks and faucets for the yet-to-be-drywall-repaired bathroom, and making an appointment for a new countertop to be selected and measured. One thing leads to another as the credit drains away.  Kindly brother installs new bathroom lighting, which looks great and works.

Electrician called to handle other, trickier installations. The only thing to do about this

hideous affront of a light fixture is to disconnect it, remove it and get kindly brother to cover it up with a piece of matching wood. There is fluorescent light in there that has gone on once in twenty years. I shudder to think what will fall out of there when I unscrew those pegs and look inside. Yikes. I wanted to install cute, small track lights, but there has never been light in that built-in, knotty pine bookcase and I can live without it. Electrician’s option was to snip the wires from the switch, stuff the others up into the hole and cover it up. Good option. Brotherly handyman services are cost of materials only. Yay. Saved credit.

Painter’s estimate for the front hall was reasonable. Electrician’s cost is hair-raising but necessary. Have just enough credit to cover them. Let’s pray that job comes through.

I’ve bored you all with my nearly year-long saga of how-not-to paint, assemble, repair, etc. I’m hoping for a big closing number. I didn’t take any “before” pictures of a lot of it, but I will take some of the “afters” so you can share the hilarious results of attempts to paint a straight line or patch plaster.

Your about to get schooled in schmeering and “feathering” drywall joint compound,