Heavy, wet, sticky – the whipped-cream, white-frosting kind, that will likely melt away by tomorrow, I hope without taking a few branches down with it, when the wind blows.

I love the muffled, muting effect of snow. Calming.

I need that today.

Yesterday, the early dark seemed menacing. More than two years on, there are still times when Mike’s absence, and the accompanying not-having-a-man-in-the-house feeling, gives me the creeps. Don’t get me wrong, I am a strong, independent woman and always have been. I can handle things, and pretty much have handled them for myself since I was 18 – and for my late husband from the day we were married until all the arrangements were finished after he died, and for my daughter since she was born.

But knowing I can handle it doesn’t keep me from sometimes doubting I can handle it, especially when I’m feeling inadequate – the too-frequent, bleak feeling of being only half, and the lesser half at that, of what our daughter needs.

She misses him so much. Two years and she only now has begun to repeat, “when a person goes to heaven, they can’t come back. Dad’s not coming back.”

And the only response I can offer is the same as I have been saying all along, that while he can’t be here with us in a way where we can hug him and talk to him, we can always feel his love with us

I’ve invited her to bring her CD’s into the car with me, but it is not the same car and he’s not driving it. She just relies on the radio, now.

I keep thinking we’re getting better, that we’re learning how to move on, and then I’ll have a night like last night and a morning like today, where each moment of hope is countered by a moment of fear, guilt, shame or anger. The four horsemen of “this-is-not-who-I-want-to-be.”

There is no love without forgiveness. Why can’t I forgive myself? Why do I magnify every lapse of parental patience into a major, soul-crushing crisis of inadequacy?

Because Mike’s not here to tell me to snap out of it and stop being such a drama queen?

She gets over it before I do.

Am I doing anything right?

This third Thanksgiving without him, I agreed to take our daughter to dinner at my brother’s in-laws. They eat much earlier in the day than we usually do, but it is a chance for my daughter to finally have a family holiday with a lot more family – I’m nostalgic for the big family holiday meals we had when I was a child, with grandpa and the uncle or the cousins. She’s never really had one like that. Grandpa died long before she was born, the cousins moved away, and Mike wouldn’t go, so for years it was just the two of us and my parents. Then just the three of us, at home. Now just the two of us, alone – but I keep the empty third chair at the table. That’s probably not healthy, anymore.

I hope the change will be good for her — she’ll get to meet some cousins-in-law that have only been mythical to her so far.

And I hope it will be good for me, to be around more people – other adults – and to be forced by social convention and good manners to get out of my own head for a while.

By the end of today, my daughter will have new carpeting in her room. Carpeting called “party” from a series called “joy.” Appropriate for her beautiful, joyful, resilient spirit.

The new carpeting for my room and the hall won’t come until January, but I don’t mind waiting. Next year, 2019, is a Big One for me, birthday-wise. Might as well start with new carpet and go from there.

For today, though, I’m just going to look at the snow, eat some soup, be still, and try to “get back to just right,” as we say in our house.

Hoping that the muffling effect of the snow will muffle my fears and my self-doubt, but not my heart, I remain, 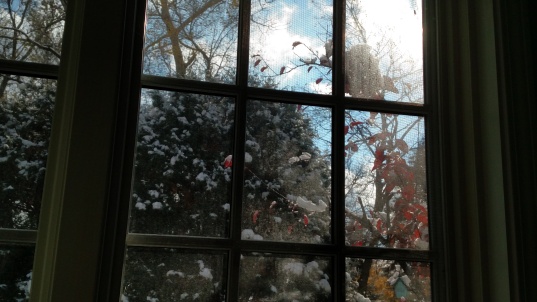 the sun will come out soon,

Everybody has a story. Here's a little of mine.